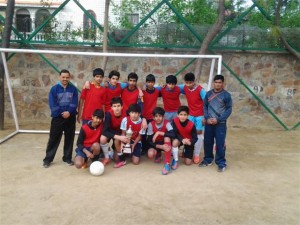 We arrived at Pathways on the second day of the invitational tournament. Our first match was against Tagore International. We didn’t have much time to strategise, but managed to cruise past them with a score of 3-0. Then we faced the home team, Pathways X. We had made many strategies – man to man marking, free kick takers etc. We scored early but could not hold on to the lead as they scored in the very last minute. It ended 1-1. We moved on to the semi finals, which was against GD Goenka. The pressure was on. Sumant Mathur, our highest goals scorer, scored through Ritwick’s rebounded shot. We held on to our lead till the very end. We won 1-0! We were on to the finals. The whole school came down to watch it, and the pressure really was intense this time. Dharmendra sir had given us several instructions and we tried our best to follow them. Unfortunately, Pathways were granted a free kick which they converted. We tried our best but could not score. We lost 1-0. Disappointed but still happy, I felt elated lifting the runners-up trophy in my hand. Ritwick Dutta won Best Striker.