The course curriculum framework is presented as six academic areas enclosing a central core. It encourages the concurrent study of a broad range of academic areas. Students study: 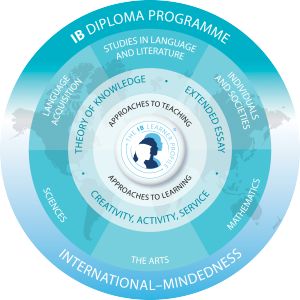 It is this comprehensive range of subjects that makes the Diploma Programme a demanding course of study designed to prepare students effectively for university entrance. In each of the academic areas students have flexibility in making their choices, which means they can choose subjects that particularly interest them and that they may wish to study further at university.

IB Diploma Programme students must choose one subject from each of five groups (1 to 5), ensuring breadth of knowledge and understanding in their best language, additional language(s), the social sciences, the experimental sciences and mathematics. Student may choose either an arts subject from group 6, or a second subject from groups 1 to 5.

About Subjects offered at TSRS